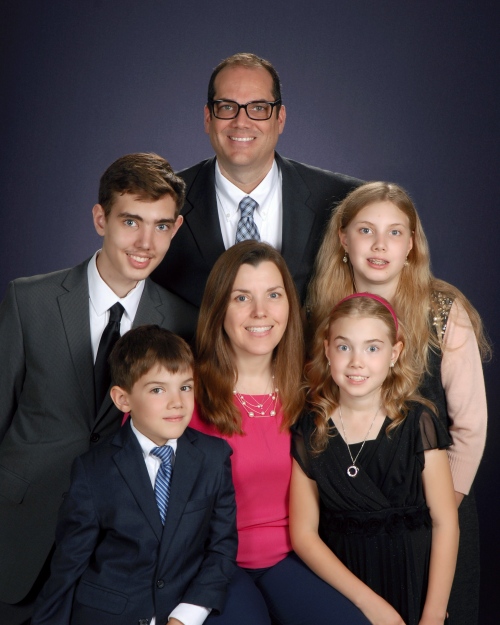 My name is Eric Williams, and this is my wife Deborah, and our four children, Kelsey, Grace, Meredith, and Oliver.

When we were approached by Kim Wright to do this talk, two questions came to mind: “How did we get here? And Why were we chosen?” To answer these questions, we would have to go all the way back to the beginning.

No, not in the beginning as in the book of Genesis, but to the information table on the plaza. Do you remember that table that you had to walk past every Sunday on your way in and out of Mass? There was always a smiling face waiting to greet you. As you walked by that table week after week, that smiling face grew more and more familiar and it made you feel like you were part of a community.

When we started attending St. Thomas More in 2006, we had just moved to North County because of Eric’s job. We had two small children and another on the way. Moving to a new area, was hard for us because our closest extended family was all the way in Los Angeles. So volunteering was the furthest thing from our mind. And when Fr Mike. asked us about serving in a ministry, we even told him: “our ministry was just to get our children to Mass on-time.” But we found that the information table made it easier for our busy family to be a little more involved and even feel like we were part of the church. How could you just walk past the Angel Tree with your little children and tell them not to take an ornament. It’s like telling them that you don’t want to help people less fortunate than you.

Our experience at the information table kind of explains how we got here, but to answer the question how we were chosen, we would have to tell you more about our background. How we became Catholic —that point in your life when you become chosen by God. If you’ve ever been to an Easter Vigil here at Saint Thomas More, everyone knows that is when the Church baptizes and confirms adults. Every year, Fr. Mike asks the people who entered the church in this unique way to stand up. You may or may not have noticed, but Deborah and I timidly stand up to be recognized by all of you. It is always a humbling reminder of how we entered the church. You see, we were never cradle Catholics.

The Catholic seed was planted with Eric. He had an infant baptism but was never catechized beyond that. Even though he never even made it to his first communion, it seemed that God was not going to let that be the end of it. The seed took root when he was an adult. This was when he was attending Loyola Marymount University (LMU). He saw a flyer on the plaza announcing the start of that semester’s new RCIA inquiry class. He attended the program and was confirmed the following Easter season. It was during this time that we began attending Mass together.

For Deborah, the closest thing to being Catholic was a Lutheran baptism. She attended Sunday School and Sunday service on a regular basis, she received her first communion and she was eventually confirmed when she was in the eighth grade. However, to her grandparent’s disappointment she stopped attending church. But that wasn’t the end of it, God had a different plan. We were married on the Feast Day of the Conversion of St Paul the Apostle at LMU’s Sacred Heart chapel. A year later, because we had been married at LMU, she completed the RCIA process there as well.

Ok, let’s return to the information table. It was situated on the plaza right in front of the gym—our humble worship space. When you left Mass, the information table was unavoidable. Here is where people could find out more information about events and volunteer opportunities. It made it easy to respond to the invitation to serve when you were ready to say “yes.” This is where Eric agreed to be a catechist for Liturgy of the Word for Children. This is where Deborah met Douglas to sign up for hospitality. Ok, Deborah met him but when he said she would need to be on time, she hesitated. Because Deborah thought, “Be on time with four children?” She had to choose to step out of her comfort zone, or maybe God nudged her. But after a moment’s hesitation Deborah said, “yes.”

What were we thinking? taking on volunteer ministries while at the same time providing a Catholic homeschool education for our four children. But maybe it’s because we strongly believe that the “parents are the primary educators of the faith.” That’s why Deborah felt the need to begin attending Kelsey’s middle school religion class. She started out as just an observer and then over time she was asked to become a small group leader. A few years later we were asked to teach our daughter Meredith’s third grade religion class. The following year, I became a small group leader for Kelsey’s year one confirmation class. But we didn’t stop there; the next year, we completed the Diocese’s Basic Catechist program and we earned our certification. at the same time as our two boys were receiving their sacraments. The next year Deborah became a small group leader for our daughter Grace’s first-year confirmation class. Currently, we are teaching the religion classes for the third grade and first-year confirmation.

What are we thinking? The struggle to catechize young people of today is “real.” The experience can be so rewarding as we’re trying to show them the proper example of what it means to be a good Catholic, but “your” children teach us how to question and better understand “our” faith—this is an awesome gift. As these gifts show themselves in more and more aspects of our daily lives, it just seemed natural to want to show it in our worship of Jesus. So, we responded to the need for more Extraordinary Ministers of Holy Communion. We find this ministry so humbling by the way all of you approach the sacrament of Holy Communion with such reverence—it is so awe inspiring.

What is also so very humbling is the way in which this community has inspired our children to want to serve. They also are involved in many ministries at the St. Thomas More Catholic Church. But let them tell you about it themselves:

“My name is Grace. I have been altar serving for six years, and as of recent I have become a Eucharistic Minister of Holy Communion.”

“My name is Meredith. I have been an altar server for four years. I serve on Sundays, Holy Days, and funerals.”

“My name is Kelsey. I began altar serving when I was nine. When I was 14 Rebecca wanted me to be Thurifer, so I began serving at funerals to learn how to be a Thurifer. Currently, I am a sacristan and a Representative for this year’s Diocesan young adult synod.”

“My name is Oliver. I became an altar server this past year. My first-time altar serving was at a funeral with my brother and sisters.”

As we look back on our stewardship journey that has brought us here, we see all the people who inspired our family. Especially, one individual who stands out is Rebecca Eyer. Her devotion to the Eucharist was such a strong example. It is hard to go through the motions at Mass without remembering how much she taught our family. We appreciate this and just want to be able pass it on to others.

Little did we know that when we finished the RCIA program over 21 years ago, how much we would continue to learn and grow in our faith. St. Thomas More Catholic Church has given our family so many opportunities to share our gifts. Is it an accident that what started out small at the information table would lead to such an active faith life? We like to think that is no accident—God must be guiding us along the way. It’s just that the journey looks different for each and every one of us. Some of us offer extraordinary gifts like St. Joan of Arc or St. Augustine of Canterbury, but some are simpler like that of St. Thérèse of Lisieux or St. Rose of Lima. But the end result is the same: the more we say: “Yes!”, when asked to serve, the more we begin to feel joy. Not a selfish joy, but one of gratitude, to God for all the abundance that He gives to each one of us.

It is in this gratitude that we have this awesome responsibility that leads us all to a desire to give of our Time, Talent, and Treasure. Just think, this congregation started out worshipping in a strip mall, and now we have the Church we all worked for, for so long.  And like all of us we are still on a journey, growing and changing. Unfinished—just like our Church.