by Robert Ellsberg, All Saints 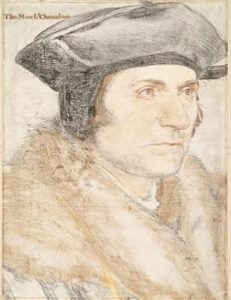 Thomas More was one of the most highly respected men of his time. A successful barrister, a judge known for his scrupulous integrity, a scholar, famous for his wit and learning, he rose by sheer merit to the highest status of any commoner in England. After a series of important public offices, he was in 1529 appointed by King Henry VIII to the post of Lord Chancellor of England. To this his friend Erasmus, the Continental humanist, remarked, “Happy the commonwealth where kings appoint such officials.”

Despite his achievements, More had little ambition for worldly success. More was a man of deep and demanding faith. In his youth he had considered a monastic vocation before deciding instead that he was called to serve God in the world. While outwardly he enjoyed a life of comfort, in the privacy of his spiritual life he wore a hair shirt, attended daily Mass, and practiced a strict discipline of prayer.

More maintained a large household and took special delight in his children. His role in overseeing the education of his daughters, especially Margaret, his eldest and favorite, was considered remarkable for the time. After the death of his beloved first wife, he quickly married an older widow, Alice. She proved a loyal wife and a good stepmother, though she was prone to exasperation with her husband’s scholarly friends, his sense of humor, and his costly scruples.

King Henry had reckoned wisely on his chancellor’s brilliance and honesty. In all matters of his office More served with loyalty and distinction. But circumstances were to evolve to the point that Henry required a more absolute loyalty than More could offer. For some years the court of Henry had been moving toward a fateful collision with the authority of the Catholic Church. The issue was the king’s desire to annul his marriage to Catherine of Aragon so that he might marry Anne Boleyn. Catherine refused to acquiesce in this scheme, and the pope upheld the inviolability of their marriage. When Henry made clear his intention to have his way, regardless of the church’s ruling, More resigned his office rather than publicly oppose the position of the king. He retired to his country home and endeavored to ignore the raging controversy. Nevertheless, it was widely remarked that he declined to attend the coronation of Queen Anne.

In 1534 an Act of Succession was proclaimed. All the king’s subjects were required to take an oath recognizing the offspring of Henry and Anne as true successors to the throne. More had no problem with this. As far as he was concerned the king was free to declare any successor he liked. However, the oath also required an avowal that the king’s marriage with Catherine had been no true marriage and a repudiation of “any foreign authority, prince or potentate.” Such an oath represented a decisive break with the authority of the pope. This oath More refused to take. Consequently, on April 17 he was arrested and imprisoned in the Tower of London. He remained there for fifteen months. All the while the court pressured him either to take the oath or to state his reasons for withholding his assent. More would do neither, believing that as long as he kept his opinions to himself he could not be convicted of treason. He was presented with a parade of clergy and bishops who all (save Bishop John Fisher) had signed the oath. More maintained that others must abide by their own conscience, as he must be true to his own. Meanwhile, the miseries of prison life, including cold, hunger, and vermin, were compounded by pressure from his family. When his wife tried to coax him to alter his course, he responded, “My good woman, you are no good at doing business. Do you really want me to exchange eternity for twenty years?”

On February 1, 1535, Parliament passed the Acts of Supremacy, which proclaimed the king “only supreme head of the Church of England.” Thomas continued to maintain his silence. Finally in June he was brought to trial. On the basis of perjured evidence, he was convicted of having spoken against the Acts and sentenced to death. Now, with his fate settled, Thomas at last broke his silence. He denied that Parliament had the authority to set up a temporal lord as head of the church. No more could the English Parliament overrule the law of the universal church, he declared, than the City of London could make a law against an act of Parliament. Finally, he addressed the lords who condemned him, noting that while St. Paul had persecuted St. Stephen, “and yet be they now both twin holy saints in Heaven…so I verily trust, and shall therefore right heartily pray, that though your lordships have now here on earth been judges of my condemnation, we may yet hereafter in Heaven merrily all meet together to everlasting salvation.”

He spoke in similar terms as he bade farewell to his loyal daughter Margaret: “I will pray for us all with my whole heart, that we may meet one day in heaven, where we shall forever be gay and have no more pains.”

On July 6 he was taken to the site of execution. Addressing those gathered about he made brief remarks before laying his head on the executioner’s block: “I die in and for the faith of the holy Catholic Church. Pray for me in this world, and I shall pray for you in that world. Pray for the king that it please God to send him good counselors. I die as the king’s true servant, but God’s first.”

Thomas More was canonized by Pope Pius XI in 1935. His feast and that of his fellow martyr John Fisher are celebrated on June 22.

Prayer for Fervor in Thinking of God

O Lord, give us a mind that is humble, quiet, peaceable, patient and charitable, and a taste of your Holy Spirit in all our thoughts, words, and deeds. O Lord, give us a lively faith, a firm hope, a fervent charity, a love of you. Take from us all lukewarmness in meditation and all dullness in prayer. Give us fervor and delight in thinking of you, your grace, and your tender compassion toward us. Give us, good Lord, the grace to work for the things we pray for. — Thomas More

“Little as I meddle in the conscience of others, I am certain that my conscience belongs to me alone. It is the last thing that a man can do for his salvation: to be at one with himself.”

“Reputation, honor, fame, what is all that but a breath of air from another person’s mouth, no sooner spoken but gone? Thus whoever finds his delight in them is feeding on wind.”

In his book Utopia, Thomas More coined the term “utopia” which is a pun meaning both “good place” and “no place.” More’s Utopia is discovered on a voyage to the newly discovered Americas. It is one of the first books to invoke the analogy between the great voyages of discovery and the discoveries of the mind. He is also thought to have introduced “fact,” “taunt,” “shuffle,” “paradox,” “pretext,” “meeting,” “monosyllable,” and “anticipate” into the written English language.

1478
February 7, born in Milk Street, London, to John More who was a lawyer and would become a judge on the king’s bench.

1491
Placed as a page in the household of John Morton, Lord Chancellor to King Henry VIII and the Archbishop of Canterbury.

1492
Enters Oxford for two years of study. 1494 Went to Inns of Court to study law at his father’s insistence.

1499
Becomes a barrister after completion of his law studies.

1504
Becomes a Member of Parliament.

1505
Decides against priesthood and marries Jane Colt, saying he would rather be a good husband than a bad priest.

1515
Sent on diplomatic mission to Antwerp where he begins writing Utopia.

1518
Made Master of Requests and a member of the Privy Council of Henry VIII.

1523
Elected Speaker of the House of Commons.

1529
October, made Lord Chancellor of England.

Center for St. Thomas More Studies at the University of Dallas